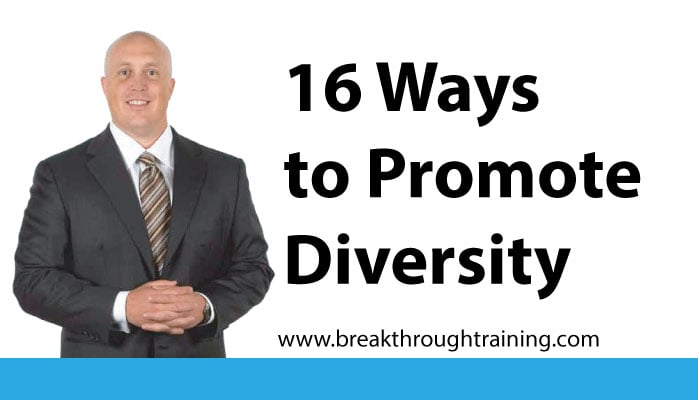 Destruction has occurred throughout history when attempting to constrict diversity. Conversely, magnificent innovations have been discovered through the differences we share.

Diversity is a variety of anything. A diverse population will have different personalities, abilities, cultures, age groups, sexual preferences, religions, races and beliefs of thought, to name a few.

Your personal and professional success is influenced by your ability to embrace diversity. Here are a few ways to embody diversity.

1. Seek out people with diverse backgrounds. A brilliant chef is one who tastes many dishes. Opportunities are lost if you only share your time with people who agree with your perspectives. Take the time to speak with people who dress differently, speak oddly, or believe strangely. You may seem as foreign to them as they are to you to. Focus on what positive lesson they can teach you.

“Whatever you are be a good one.”

2. Give everyone a voice. Ask your team members to share their experiences and insights. Encouraging and allowing people to share their opinions demonstrates that you value them. Silencing and shutting people down discourages the contributions needed to solve problems, improve service and increase the bottom line.

3. Abolish a superior attitude. Acting like you are better than someone else is a poor path to follow.  It will only lead you to lack of support. No one holds in high regard a person who treats others as though they are inferior to them. Demonstrating an attitude of equality is the best route.

4. Be the leader. Embracing diversity is done through example. Waiting for others to take the lead might not advance the objective of creating and sustaining the abundance of information and knowledge that is available to you through other people. Be the one to initiate an appreciation of the abilities and contributions of others.

“The only thing necessary for the triumph of evil is for good men to do nothing.”

5. Oppose hate. Don’t allow yourself or others to engage in behavior that restricts another person’s ability because of age, ethnicity, gender, or religion, etc. Let a person’s merit and added value determine your judgment. The most noted champions in recent history to oppose hate are Gandhi and Martin Luther King, Jr. You don’t have to create a movement, but you can speak against those that demonstrate a lack of tolerance or the destruction of another person because they are different.

6. Avoid ridicule. Treating others with contempt disparages inclusion. Taunting people or jeering them can destroy any possibility of having a productive relationship. You don’t like to be razzed or lampooned do you? Then don’t do it to other people.

7. Allow for second impression. Research shows that we form impressions about people within seven seconds of meeting them. We decide whether we like them or not, whether or not they are trustworthy, their social status, education level and much more – all within seven seconds. Of course, our impressions are not always accurate. Certainly you have been wrong more than once about what you thought of someone. Our judgment can easily be clouded by hearsay, preconceived notions and prejudices. As long as you don’t think your safety is in danger, allow people to make a second impression.

8.Acknowledge the beliefs of others. A belief is a perceived truth that you have acquired through an experience or a trusted resource. Yes, people have a contrary view to yours; different beliefs. This does not mean you are relinquishing your convictions. You are not selling out your ideals. Do the best you can to practice acceptance.

9. Practice acceptance. Accept others for who they are, not for who you want them to be. This is far easier said than done. You might not want to sport purple hair, but maybe your son or daughter does. You might enjoy reading books while your significant other prefers to watch television. One of your co-workers talks real slow and you speak fast. A key to increasing your acceptance is to remind yourself of how boring life would be if we were all alike!

10. Do something different. The point is to leverage different thoughts and perspectives. Pick up a book that articulates an unfamiliar view. Study a foreign language. Research something you know nothing about. Visit another country. Engaged in anything that will expand your current knowledge and viewpoints.

11. Appreciate the unique contributions of others. Take the time to acknowledge and recognize people’s value. Too often people don’t compliment others for their contributions. It takes only a few seconds to offer an accolade or a few kind words of appreciation.

12. Discourage cliques and exclusive groups. An environment of lack of inclusion is futile. Special groupings or clubs that discourage participation from different viewpoints ought to be reconsidered. Being affiliated with a certain group is almost guaranteed, but being a separatist is ineffectual.

13. Make an apology. At one time or another you probably offended someone for having a different view from yours. Do the right thing. Clear the air. You can make amends. Be brave. Apologize.

14. Focus on integration not separation. We live in global economy. America is known as a melting pot. Everyday you encounter ideas that conflict with your sentiment. Fencing off the opportunities awarded to you from the perspectives of others can be damaging to your progress.

15. Allow fulfillment of potential. Remove age, race, gender and other physical differences. Instead, see others for their contributions and the value they add. Discriminating because someone who is not like you is stupid. You have more to gain from listening to people who have a varied approach.

16. Be your best, always. “Abe Lincoln remarked, “Whatever you are be a good one.” Your title does not define you, but how you perform your title does. Your actions will define you even if people decline you. Be mindful of blaming. It is easy to point a finger at someone who does not agree with you. Just because you have not gained their consent, it does not mean discrimination is occurring. In the long-run, performance outlasts displacement.

Best of success to you!